The Razr is back, but now it’s an Android smartphone that can fold in half. Motorola has officially announced its rumoured (and much-leaked) modern spin on the iconic flip phone. The 2019 Razr keeps the same general form factor but replaces the T9 keypad and small LCD with a 6.2-inch foldable plastic OLED panel and Android 9 Pie. It’ll cost $1,499 when it arrives in January 2020.

The new Razr is a fundamentally different take on the foldable phones that we’ve seen so far: instead of turning a modern-sized phone into a smaller tablet, it turns a conventional-sized smartphone into something much smaller and more pocketable.

This isn’t the first time Motorola has tried to bring back the iconic RAZR branding. There was an entire line of fairly generic Droid RAZR phones a few years ago on which Motorola just slapped the name in hopes of reminding customers of its past glory. (You may remember that Motorola styled the old RAZR logo in all caps. For this new model, Motorola is doing the opposite with the lowercase “razr.” Since I’m a human, I’m going to henceforth use “Razr” to refer to the new model.) 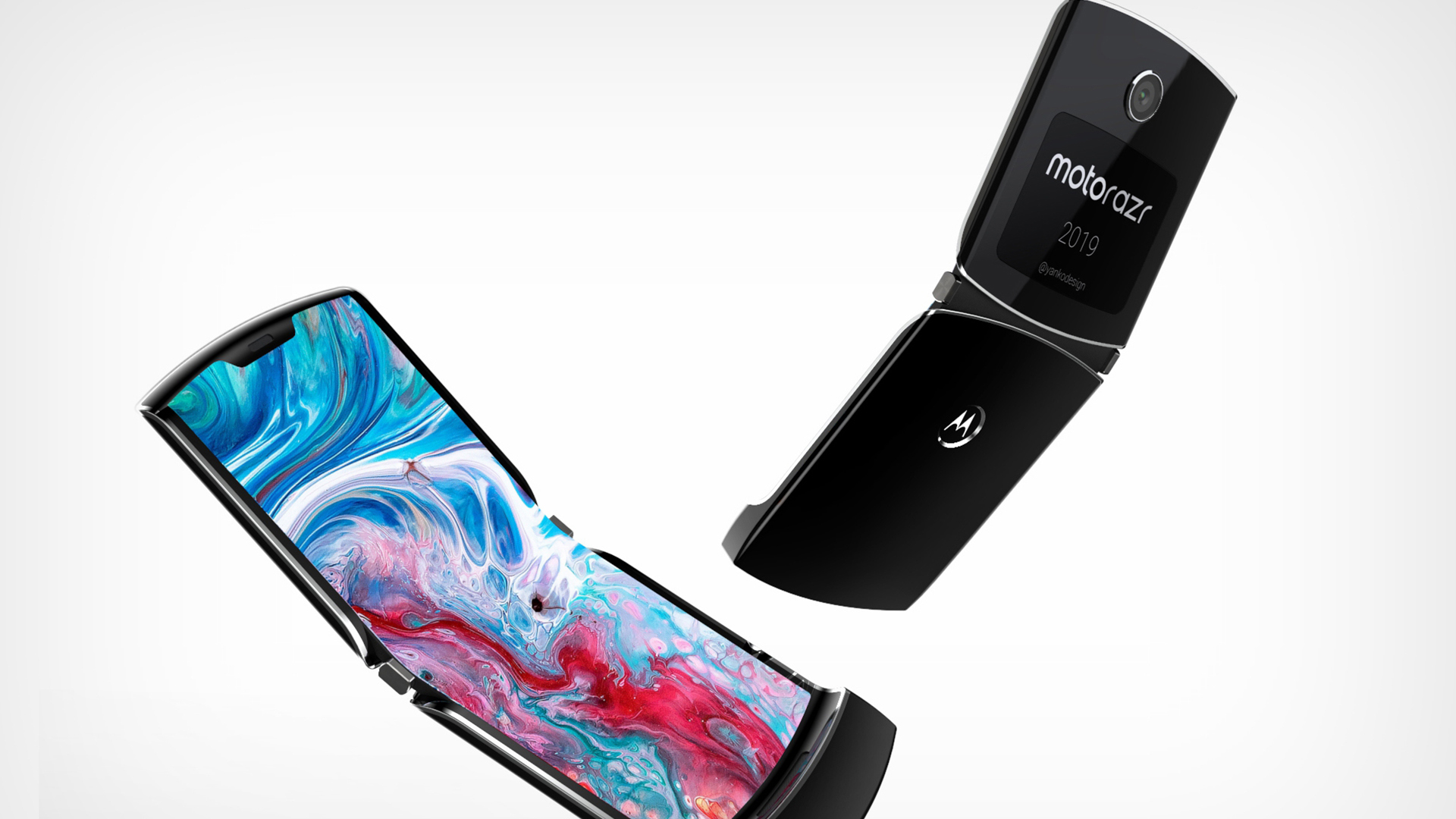 But the new Razr is much more than just a familiar brand name. This is a true heir to the original flip phone, with a design that’s heavily inspired by its 2004 predecessor, right down to the big curved chin on the bottom (which now also hosts a more modern fingerprint sensor and a USB-C charging port).

But it’s not just a modern-day throwback hoping to cash in on nostalgia, like we’ve seen from HMD’s resurrections of classic Nokia hardware lately. It’s Motorola’s attempt at building a modern-day flagship phone the likes of which it hasn’t tried to make in years.

The core of the phone is, of course, the display. It’s a 6.2-inch 21:9 plastic OLED panel that folds in half along the horizontal axis. Unfolded, it’s not dramatically bigger than any other modern phone, and the extra height is something that the Android interface and apps adapt to far better than a tablet-size screen. The screen does have a notch on top for a speaker and camera and a curved edge on the bottom, which takes a bit of getting used to, but after a minute or two, you barely notice it.

There’s also a second, 2.7-inch glass-covered OLED display on the outside that Motorola calls the Quick View display. It can show notifications, music controls, and even a selfie camera mode to take advantage of the better main camera. Motorola is also working with Google to let apps seamlessly transition from the front display to the main one.

There are some concerns about durability for the folding display, especially after Samsung’s Galaxy Fold issues. But Motorola says that it has “full confidence in the durability of the Flex View display,” claiming that its research shows that “it will last for the average lifespan of a smartphone.” There’s a proprietary coating to make the panel “scuff resistant,” and it also has an internal nano-coating for splash resistance. (Don’t take it swimming, though.) Motorola says that the entire display is made with a single cut, with the edges entirely enclosed by the stainless steel frame to prevent debris from getting in. The company also points to its years of experience with plastic OLED panels (going back as far as 2011), noting, “We’re not going to go out there and say, ‘consumers should be cautious of how they use the phone.’”

Part of that confidence has to do with the hinge, which Motorola worked with Lenovo to make. It uses a complicated mechanism of multiple hinges and sliding plates to fold and unfold the phone. More importantly, it really does seem to live up to Motorola’s promises: the device unfolds to a fully flat panel, with no visible or tactile creases, and then it folds up completely flush. (It’s actually exactly the same thickness folded as the original RAZR.) Holding the folded Razr up to the sun, you can see a crack of daylight shining through, but otherwise, the gap is barely discernible. It’s very impressive and the current high water mark in the still-fledgling foldable market.

With all of that out of the way, how does it actually feel to use the new Razr? The answer is great. It’s been years since there’s been a truly viable high-end flip phone, and it’s easy to forget just how enjoyable that flip phone experience is. Picking up the new Razr immediately brings you back. 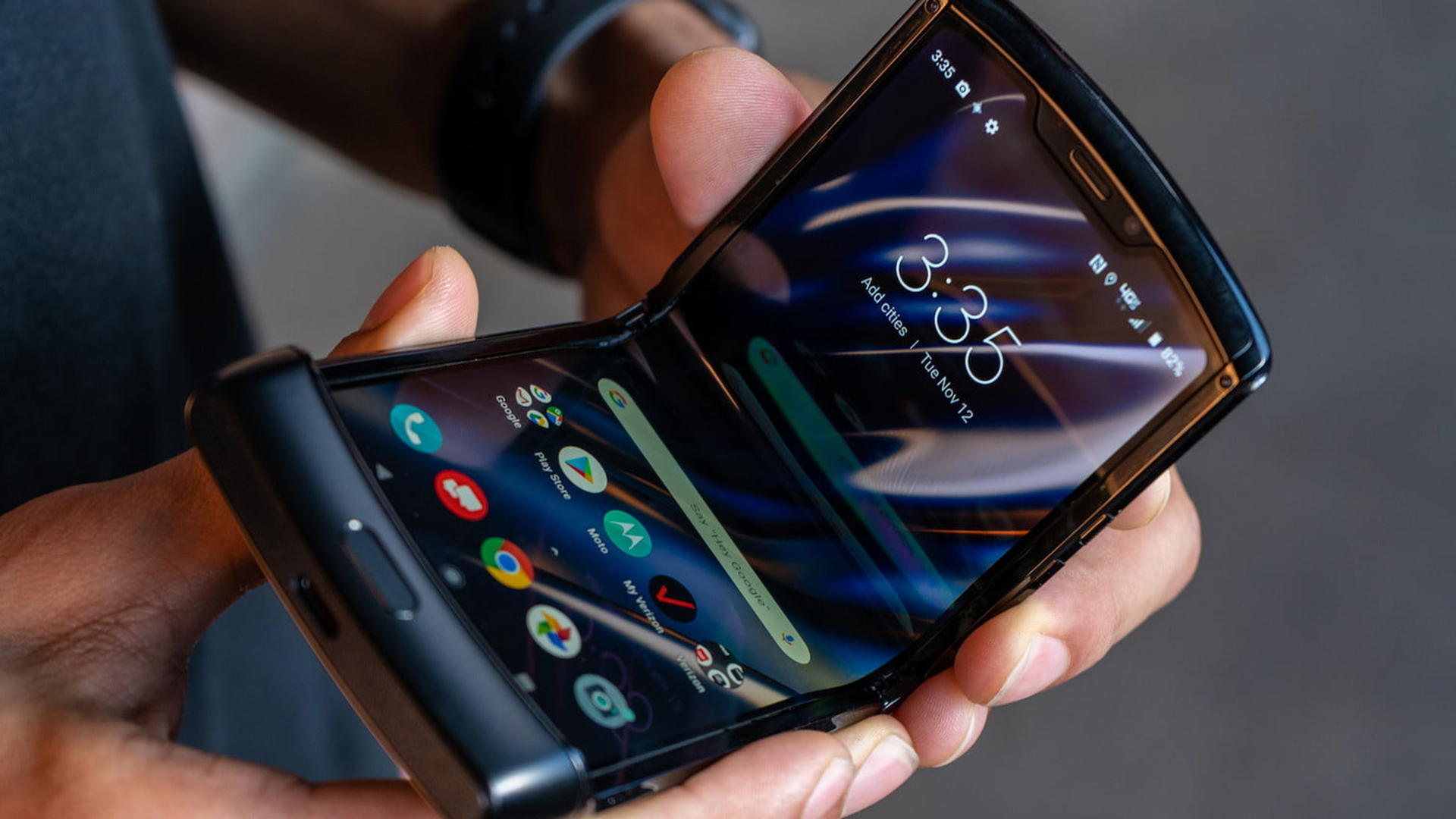 It’s definitely a little hard to get used to folding it with one hand, though. I’ve got bigger hands than most, and it’s still a bit of a juggling act to get it to fold just right. Opening it is easier, although it does take a fair bit of manoeuvring to get a thumb in between the two screens (which I guess is a testament to how flat it folds). Once you’ve got it partially cracked open, though, you’re able to just flick it open the rest of the way with your thumb, just like you used to all the time with the original RAZR.

The hinge is also a bit stiff so you won’t be able to just whip it open with a flick of a wrist — closing it with one hand also involves some more finger contortions to start the closing action. It’s just more practical to close it with your other hand.

Even with these caveats, the whole opening and closing mechanism is supremely satisfying to do, with crisp snaps in both directions. Snapping the phone shut to hang up on a call is a particular delight; there really is no better way to end a call than the classic flip phone snap, and it’s excellent to see that Motorola has kept it alive here. The hardware feels great, too, with solid-feeling stainless steel and glass on the outside and a wonderfully textured back that’s nice and grippy, which is essential for not dropping it while flipping it open and shut. (It is a fingerprint magnet, though.)

The design isn’t just a novelty, either. The folding design actually solves a lot of the issues on hand with most smartphones today. Think phones are too big? The Razr folds up to fit in nearly any pocket. Worried about getting your screen scratched? The Razr’s is protected at all times. Notifications are too distracting? Deal with them on the more limited front display instead of falling down an internet rabbit hole.

On the flip side, that Razr design is so core to the experience here that Motorola is compromising a lot in other areas. The processor is a Snapdragon 710; that’s not a bad chipset, but it’s not a flagship 855 either. The company says that the decision here for the weaker processor is to optimise battery life and heat: in order to have a day-long battery and the thin design, it had to go with a slower chip. The lacklustre 16-megapixel camera is a similar decision. Motorola just couldn’t fit a bigger or better camera module while keeping the design it had.

Those compromises are tough to swallow when you factor in the Razr’s price. At $1,500, it’s simultaneously the cheapest foldable phones on the market and dramatically more expensive than any flagship device from Apple, Samsung, or Google. That’s a ton of money to spend on a single phone, much less one that’s shipping with midrange specs. Preorders are set to start on December 26th, but the phone won’t ship until January (although there are no exact dates announced for either). Lastly, it’ll only be sold on Verizon in the US, at least for now. Motorola had nothing to say about an unlocked version.

Despite Motorola’s assurances of the Razr’s durability, the company is promising a “special world class service plan,” with 24/7 chat support and 14-hour-per-day direct access to a customer service agent as well as 24-hour turnaround for repairs.

Additionally, the one-year warranty period will offer free replacement or repairs to the phone or display for “defects incurred during normal use.” Once the warranty is over, though, replacing the foldable screen will cost $299.

After a few hours with the 2019 Motorola Razr, I’m still not sure if it’s going to be a good phone, at least not in the conventional sense. It’s too expensive, with specs that are too weak for the price, especially compared to the wealth of more powerful phones with better cameras and hardware that are available. And the foldable display technology is too untested to be truly reliable, even with Motorola’s assurances.

But I’m still really excited by the Razr and the fact that it exists. It’s a phone that looks and feels like the future of phones. We’ll have to spend a lot more time with the device to see whether Motorola manages to stick the landing on its first attempt. But if nothing else, it’s a bold idea that pushes the concept of what a smartphone looks like forward, and that’s an exciting thing to see.

Chaim Gartenberg is a news editor for The Verge specializing in gadgets and all things new in the tech industry, whether that's specs for the latest phones, trying out a new app, or unraveling just what on earth 5G will actually do whenever it does come around. When he's not writing about tech, Chaim also tries to find time to read books (usually fantasy), play video games (usually on a Nintendo Switch), and bake homemade sourdough.
Posts by Chaim Gartenberg | Website

Chaim Gartenberg is a news editor for The Verge specializing in gadgets and all things new in the tech industry, whether that's specs for the latest phones, trying out a new app, or unraveling just what on earth 5G will actually do whenever it does come around. When he's not writing about tech, Chaim also tries to find time to read books (usually fantasy), play video games (usually on a Nintendo Switch), and bake homemade sourdough.